Each time a very special event: the colorful processions in Seis and in Kastelruth on religious holidays. It is a unique picture when the large flags are worn by people in charming old costumes in the sound of the music band through the streets of the villages. Experience the traditional local events of the Alpe di Siusi - In our Dolomiti Hotel ABINEA, we will gladly tell you the dates and give you more information!

This horseback riding spectacle links history, sport, tradition, culture, and folklore in a very special and unique way. It is a real highlight on the entertainment calendar. It takes place every year at the beginning of June and lasts one entire weekend. The opening of the tournament takes place on Friday evening in one of the three villages of Fiè, Siusi, or Castelrotto. The opening parade takes place on Saturday afternoon and on Sunday all the teams have to prove their quickness, handiness and ability to ride their horses during four different tournaments. The winner-ceremony at the Castle of Presule is the end and highlight of this event. Afterwards, all the visitors, locals, and tourists are celebrating the success of the teams- according to medieval tradition!

Many fans of the Kastelruther Spatzen consider the Open Air Festival, which takes place in the beginning of June as one of the nicest of the music group’s concerts. This nostalgic concert under open sky with its fireworks in the end surprises the fans every year anew. Pure romance…right beneath the Sciliar.

Every Tuesday in Castelrotto, every Wednesday in Siusi, and every Thursday in Fiè are the stores open past their regular opening hours until 10pm. At the same time, you will find musical and other cultural entertainment on the streets that is characterized by the themes of “old tradition” and “witches”.

Lovers of classical music can enjoy in the dolomiti holidays every day two concerts of very talented music students from all over the world. These young and ambitious artists from countries such as the U.S., Canada, Russia, and Japan are preparing for their musical careers in the Summer Academy in Fiè. Internationally recognized artists and music pedagogues are helping the students to succeed. Not only are these concerts geared toward fans of classical music, but also history fans will profit from the concerts, which take place in historical buildings (e.g, the Castle of Presule) of the villages of Siusi, Fiè, Castelrotto at the foot of the Sciliar.

Young artists, who are mostly from Italy and who build on their international experience, perform the work of great music composers during the months of July and August. This special line of concerts quickly became a big part of the summer cultural entertainment program of Siusi because of its high level of quality. Locals as well as tourists are highly pleased with this event.

The fans of the Kastelruther Spatzen have the opportunity to enjoy the great music of the heroes of Folk Music and to be overwhelmed by the unique view and surroundings of the Dolomites. Every year, the festival takes place in Castelrotto on the second weekend in October. This are holidays in dolomites mountains

Discover more about the history, philosophy and cuisine of ABINEA.

Here you can get more information about the wellness area of the hotel. Enjoy your private SPA, sauna or beauty treatments in the ABINEA Hotel Dolomiti Alto Adige.

Here you will find all our rooms: There is certainly the right thing for you

Here you can find special offers for early bookings or last minute trips to ABINEA. 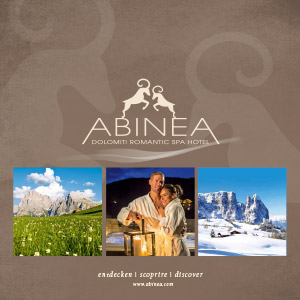 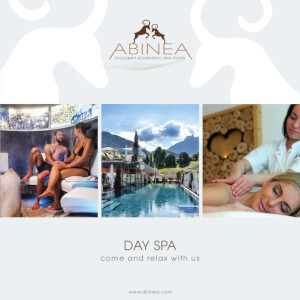